“We cannot change the outcome but we can assist the journey.”(Ann Richardson)

Widen the horizons of charity" is an offshoot of the reflections on the occasion of the silver jubilee of the St, Thomas Province of Little Flower Congregation. The same kindled the new venture of the Province at the social ministry as “Samaritan Pain and Palliative Care Unit” on 19th March 2018. It was inaugurated by Mr. P.J.Joshua, Chief Editor of Malayala Manorama Daily, Kozhikode in the presence of Rev. Dr. FR. Francis Killivallikal CST, Superior General, Rev.Dr. FR. Joby Edamuryil CST, Provincial Superior, members of the province, and the well-wishers of the nearby neighbourhood.

To officiate this social venture, it was decided to avail the auspices of “Samaritan Home’, an Ashram of the Province at Nellikunnu and the Samaritan Trust that coordinates the ministries of Samaritan Ashram with the help of public for the last twenty years or so. In order to organize and guide the “Samaritan Pain and Palliative Care Unit”, an advisory committee was formed. The official inauguration of the Samaritan Pain and Palliative Care Unit was decided to be held on 17th August by Mr. Ramachandran Kadannapally, Minister of archaeology and Harbour Department. But this event had to change due to the catastrophe stroke the entire Kerala during this month. The flood was everywhere, including the neighbourhood of Samaritan home. Hence the inauguration and blessing of the new building were held on August 17, 2018, by His. Excellency Mar. Joseph Pamplany, Auxiliary Bishop, Thallassery Archdiocese. The medical team of Samaritan Pain and Palliative Care unit began its service on 2nd September 2018 under the leadership of Dr. Lilly. 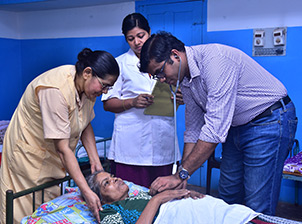 Pain and Palliative Care Centre is being operated under Samaritan Trust (Reg. No. 99/IV/17). The trust is purely charitable in nature and there will not be any activity of profit making involved in its mission. The operation of this unit involves a doctor, a nurse, clinical psychologists, group of volunteers (OPPAM) etc. Different segments of works are being carried out by this organization.

When persons of good will come together, wonders happen. OPPAM (Organization of Pain and Palliative Assistance and Management) is a team of volunteers with exceptional interest for the holistic progress of the society. These like-minded persons from different walks of life come together and organize various programmes to support weaker sections of the society. Their services with the close accompaniment of Samaritan were meritorious in very crucial times especially at the 2018 flood that affected the entire state of Kerala. Animation programmes and social welfare activities keep their dedication growing. OPPAM is the channel to reach out to the deserving members of the society and act according to the needs. As a multi-skilled community, OPPAM creatively addresses all possible affairs of social welfare. They are active members of WAR (We are Ready), an initiative of Kerala Police to face and respond to the natural calamities and disasters. OPPAM members collaborate with this scheme under the patronage of Janamythri Police Sreekandapuram. They are the backbone that keeps the mission of Samaritan moving.

Home care services give remarkable consolation to the patients confined to their homes. Periodical visits refresh them physically and psychologically. In certain cases, it is more effective to shift the patients from their homes to a place where they could be closely accompanied. Samaritan Palliative Clinic is the resort to such patients. It is designed to provide treatment for long term diseases and to give facility for physiotherapy treatments. . A homely ambiance is maintained to ensure their happiness. It is one of the dream projects of Samaritan pain and palliative care unit. We hope to begin it soon.

“Your library is your paradise” (Desideius Erasmus)

Samaritan Palliative Centre has a collection of books which will be carried during home care visits. Chengalayi Public Library renders its generous support for the effective implementation of this noble cause. These books will be distributed to those who can manage to read. Monthly visits enable to exchange the books between the readers. This provides mental nourishment to the patients to a great deal as it engages the mind and gives new perspective of life. Many well wishers and benefactors add books to our home library. The Library instils a newer hope to the patients.

Together with curricular and co-curricular activities, our students need to know and feel the pulse of the society in which they live. Student being a channel of learning, we prospect the impact of extending the vision of palliative Care among the students. With this motive in mind Samaritan Palliative Care Center organizes Student Palliative Programme for students undergoing formation in schools and colleges. Old age becoming a major sociological issue of today and the days to come, the growing generation must learn to tackle the issue through an effective formation which enables them to respect, care with dignity, support and love the elders and the sick in the society. The Student Palliative Programme is facilitated through the schools and voluntary organizations with the help from experts and medical professionals. ‘ONE RUPEE FOR ONE MEAL’ is the new venture of Samaritan. Samaritan Old age Home is typically a medium which renders a great deal of example for this. Our target group is school and college students and we are operating this in collaboration with the NSS wing.

“Technology is best when it brings people together” (Matt Mullenweg)

E-palliative care is a recent development in the sphere of human health care mission. It ensures care of those patients who cannot afford to travel to hospitals for advanced treatments either due to economic constrains or geographic remoteness. A doctor dedicated to the care of palliative patients away from the hospitals will hear their needs with the help of a medical team through communication media. E-Palliative, thus provides caring presence of a doctor through electronic media. Samaritan Palliative Care unit undertakes the mission of E Palliative to its beneficiaries with the help of our volunteers and medical team. Malabar Cancer Centre Thalassery provides us with all the technical and professional support for the E-Palliative program. This will console, to a great extent, the physical and mental exclusion of the palliative and long term patients under our care.

“For I was hungry and you gave me food, I was thirsty you gave me something to drink” (Gospel)

we provide free food kit for the deserving families and try to satisfy their basic need to have something to eat. It is an enriching experience to see the almighty in hungry people and feed them as if we give it to the almighty. We remain grateful to those who extend their helping hands in carrying out this mission.

Samaritan Ambulance service assists the home care unit. The ambulance avails for the transportation of poor and critical patients at emergencies at free of cost.